Kadople.com v0.2 and ruminations on web hosting options for a microStartup

Thursday, 21 June 2012 01:39
Unknown
Last week I updated the theme for our web site, which is being hosted by Google Sites (thanks, Google!). 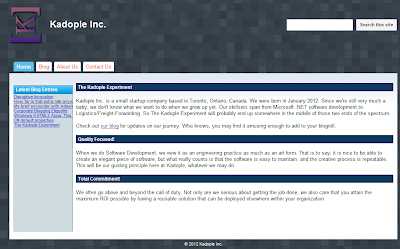 This is the second iteration of the site. I missed the chance to take a snapshot of the first iteration.
I kind of like this theme, but must admit, I’m finding that the layout customization feature is a bit limiting with Google Sites. Wondering if the Business Edition of Sites would provide more freedom in that regard. It’s unfortunate that there’s no Microsoft equivalent of Google Apps. Being a Microsoft technologist, I would have been more inclined to go with a Microsoft solution. I guess there’s Office 365 for small business, but where’s the free part of the service that would be comparable to Google Apps? There’s also wordpress.com but customization seems a bit restricting as well, unless you install your own copy of WordPress, which takes us back to the question of web hosting on a shoestring budget. Tumblr, which provides free hosting,  is also a good option, except that it’s littered with NSFW materials.

In the end, I like Google Sites not only because it’s free, but also for its scriptability via Apps Script, and may be I’ll get into some of that in the near future. So for now, Google Sites it is. The next step up for us will likely be Windows Azure. I watched some of their demo sessions at TechEd 2012  a few weeks ago and was thoroughly impressed.
Labels: Web Hosting
Share This To :
Newer Post Older Post